Savour the flavour: Waterloo Region founder of Underground Flavour Group has been at it since age 15 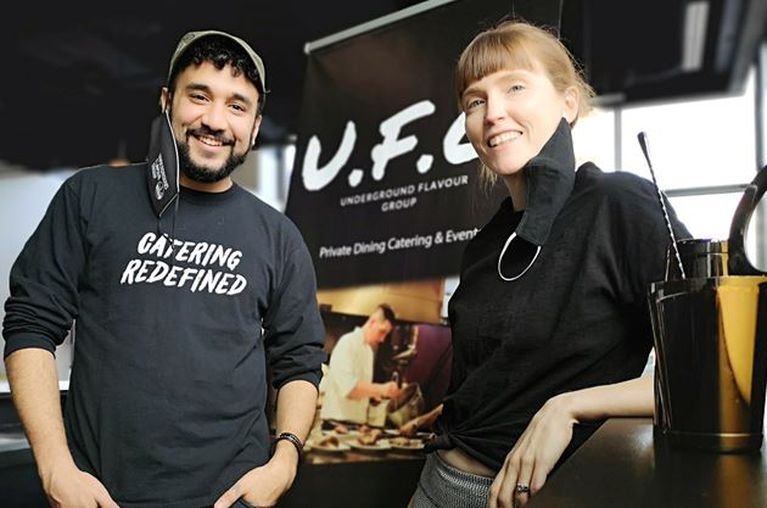 Waterloo ChronicleThursday, December 17, 2020When chef-entrepreneur Arnold Yescas created Underground Flavour Group (UFG), his intent, despite the connotation of the phrase, was to create a vehicle for giving cooks a voice and heightened brand recognition, and at the same time, encouraging creativity and a break from the conventional.Yescas says he got the idea several years ago when he was a cook at an upscale-casual restaurant in Kitchener.“I loved being able to create tasting menus for private-event customers and wanted to capture that with Underground Flavour Group,” he says.UFG is based in the former Gilt Restaurant Bar and Lounge in downtown Kitchener and opened earlier this week.Describing it as a “platform” as much as a place, UFG enables chefs to take their cooking interests where they want them to go and invites cooks from Waterloo region and further afield to create food events and menus.“It’s a sort of collective for chefs to pursue their creativity, at the same time getting their name out there.”Yescas, 26, graduated from Resurrection Catholic Secondary School in 2012 but had already shaped his place in local restaurants.“I pretty much started in the hospitality industry as soon as I could start working. I was 15 when I was a dishwasher at Crabby Joe’s in Waterloo.”He did formal culinary training at downtown Kitchener’s St. Louis education facility and at Fanshawe College. By 2015, Yescas was sous chef at Gilt before moving on to Del’s Enoteca and Loloan Lobby Bar.Citing the “difficulties” — physical, emotional, familial — that are part of the restaurant industry, Yescas says UFG offers cooks rejuvenation and flexibility for what they want to do.

If you visit the UFG website and look for Yescas’ profile, for instance, you will find the events that he’s featured in; it’s the same for the other chefs that are part of UFG. They will also create specific packages for a client, and the space can also be booked for private events.Yescas says that while they are still allowed to have dine-in they will, but they are also focusing on takeout and delivery, adding that UFG works with the local TOAD delivery app.It’s made the former Gilt a pop-up restaurant “hub” open seven days a week (as changing COVID-19 restrictions permit) with a rotation of food businesses, menus and foods.Each week breaks down into a series of days and times with different food operators. The visiting businesses and UFG share percentages of revenues: pop-up lunches and bar and snack evenings are scheduled earlier in the week, while Friday and Saturday nights are reserved for UFG’s exclusive dining series featuring a different visiting chef each weekend.“It’s usually a four-course tasting menu,” says Yescas, who has the marquee spot on Saturday, Dec. 19. He adds that visiting chefs and food operators design the menus and front-of-house vibe as they like.It means that UFG will have an eclectic personality with changing menus back-of-house and a lounge and bar area in the front of house that supports local businesses that will be able to have a storefront presence in the takeout area.“UFG means that you can support many different restaurants and chefs. We’re looking to be collaborative with restaurants, bakeries, food trucks and other food establishments. There will be different cuisines and cultures,” he notes of the collaboration and self-expression.“The whole idea is to support our local food businesses. We want to give them a cool platform in this beautiful space. It’s a great spot to do something like this so we can build community.”

Andrew Coppolino is a Kitchener-based food writer and broadcaster. Visit him at www.andrewcoppolino.com.